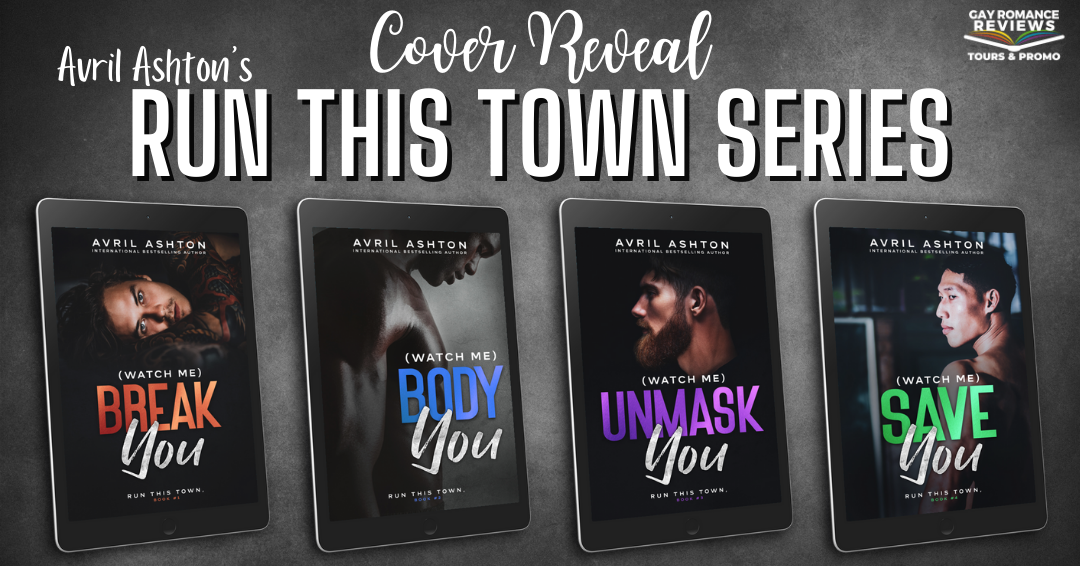 AWARD-WINNING Author Avril Ashton brings you a heartstopping series of love, secrets, and the dangerous men caught between the two…

(Watch Me) Break You 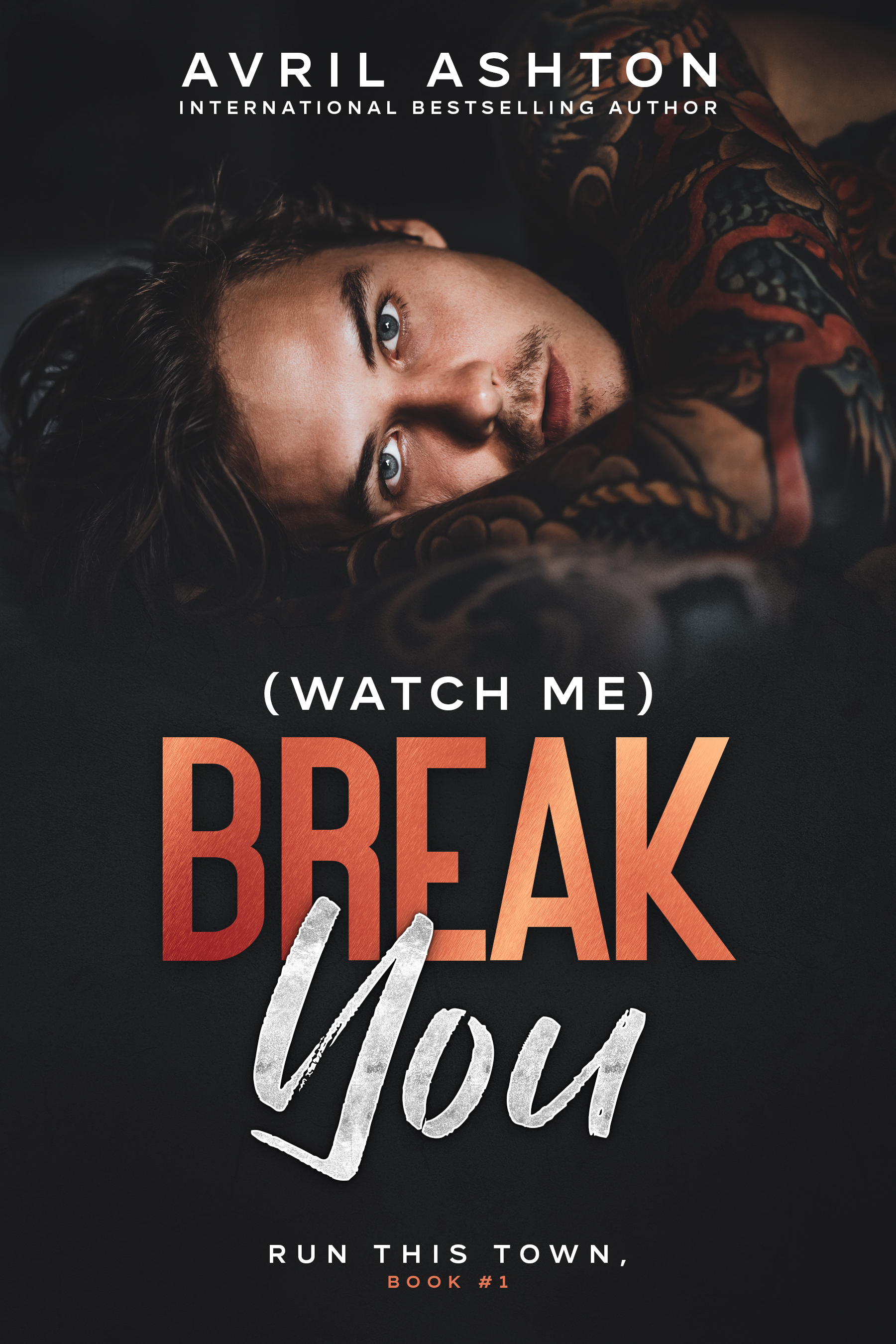 They’re in a war for control of the streets, but love will be the ultimate prize.

Men. Women. Drugs. Dima Zhirkov’s favorite things. Add in the element of danger and he should be right as rain. But not today. It’s not working, hasn’t for a long time. He’s grasping at the flimsiest of straws to prove he’s indeed strong enough to run his streets. Until he sets eyes on him. In the midst of a room full of strangers, Dima is drawn to a man as cold and dangerous as he is beautiful. Captivated, Dima embarks on a ruthless campaign to get his new toy into bed.

Xavier “X” Storm is content to pull the strings while someone else handles the day to day dealings of his gang, The Rude Boys. He’s after what Dima holds closest—the Coney Island streets. He contracts out the job of killing the Russian, except Dima isn’t that easy to kill. When he suddenly shows up in X’s path, tempting him to indulge in the dirtiest play, he finds Dima isn’t all that easy to shake, either. His cocky attitude and rough submission tempt X to go where he’d vowed to never return, and they plunge headfirst into an affair fueled by possessive obsession.

Sex and pain Dima can handle, and X delivers the most depraved kind. Their connection is explosive, their games addictive, but Dima can end it whenever he wishes. He doesn’t see that X is breaking him down, giving Dima everything he wants and even more than he ever thought to need. By the time he realizes who X is and what he wants, Dima is raw and bullet-riddled. It’s run or fight. And Dima doesn’t back down. Neither does X.

Excerpt from (Watch Me) Break You

“You haven’t asked my name. Why don’t you tell me yours and I’ll reciprocate.”

Dima caught his bottom lip between his teeth, worrying the piercing there. “Xavier,” he murmured. “What do your friends call you?”

“We’re a lot of things.” Dima winked. “Getting to be more by the minute.”

For a second there he thought Xavier was going to roll his eyes, but he just said, “X. My friends call me X.”

Dima grabbed his arm and pulled him close, their chests touching. “Xavier, it’s a pleasure. Really. I’m Dima Zhirkov.” He dropped his gaze from Xavier’s expressionless face to his lips. They needed biting in the worst way.

“I want your emotions,” Dima whispered. “That control you keep a tight rein on, the power you work so hard to conceal. I want you to unleash it on me. All of it. And I want to watch your face when you do, when you let it all go. For me.” Xavier stiffened against him; it felt as if the other man had stopped breathing. Dima tightened his hold, not willing to risk letting Xavier out of arm’s length for an instant.

“You’ve got the wrong guy, if that’s what you want.” Xavier’s voice was scratchy, full of static.

Dima tilted his head back, meeting Xavier’s gaze. “Yeah? You think so?”

“I know so.” Xavier was gone, yanking out of Dima’s hold effortlessly, opening the door and stepping outside.

Dima raced after him. “You must want to put me in my place,” he said breathlessly as Xavier hurried to his car parked in Savannah’s fenced-in driveway. “Show me who’s in charge.”

“You’ve got the gun, you’re in charge.” Xavier didn’t look at Dima as he pulled out his keys.

“No.” Dima grabbed his shoulder, turning him around and stalling Xavier’s movement. “You. I want you. Your belt, my skin. Your hands. On me.”

(Watch Me) Body You

Denial only lasts so long…eventually the heart wins out

What if loving him…

After recent events that had his life flashing before his eyes, Israel Storm is re-evaluating everything. His friends. His priorities. What’s not going to change is the deep connection he’s developed with Reggie Turner. They’re comfortable with each other, partners in crime with no qualms about sharing women. Whatever Is needs, Reggie is the one he calls. Their bond can survive anything. But maybe not the kiss Reggie plants on him out of nowhere.

Despite what Is thinks, that kiss came from somewhere. An un-named current has been flowing between them for months. Reggie doesn’t bat for his own team, but the more time he spends with Is, seeing past the rough façade of the man leading The Rude Boys, the more Reggie loses sight of labels and where he fits. All he knows is there’s something there, something Is will never acknowledge. One kiss leads to a punch that lands Reggie in the ER, and sends Is digging through his darkest memories in search of himself.

Friendship is all that’s left if they bury the truth. If they ignore the pull that makes it impossible to do anything other than fight. But denials can be exhausting and hiding isn’t working, not when everyone can clearly see your heart’s desire. An enemy is out to make an example of Is and his weapon of choice will leave this Rude Boy bloodied…and bodied.

(Watch Me) Unmask You

With one tug the thread unravels, and a world built on lies will come tumbling down

Too many bodies. Rivers of blood. Elias Kote sees them all in his sleep. Only the love of his husband and daughter keeps him alive and fighting. This contract killer is exhausted and weighed down with all the lies he tells every day. Who he is. What he does. How he came to have all he has. Elias can attest to nothing remaining hidden forever, but his secrets, when they do drop, shatters everything. Everyone. And leaves him scrambling to make his family whole again.

Ten years together. Three legally wed. One with their daughter. And in one night Lucky Mousasi’s world just…stops. What he thought was a random home invasion turns into way more. Masked men not only brutalize him, but they come armed with knowledge about Lucky, his husband, and the life he thought he knew. It seems nothing is coincidental, certainly not meeting and falling in love with Elias. Bruised, battered, heart ripped open, Lucky walks away.

An intimate rival will stop at nothing to neutralize the threat Elias poses, and the life he built out of guilt and desperation becomes collateral damage. When Lucky takes their daughter and disappears, Elias goes on a rampage. He will get his family back, but first he’s on an elimination mission. One bullet at a time.

(Watch Me) Save You

Is love enough to pull two drowning men back from the edge of darkness?

No one will love you. Tek Ng has heard that statement his entire life, and after all he’s been through, he believes it. The tortured reality of who he is wars with everything else in his world. He’s got a fiancée he doesn’t want, a family legacy he wants to escape, and unrequited love so unavoidable he descends into sexual depravity with the last person he should. Tek is drowning, but he’s not sure he wants to be saved.

Quinn Storm hides in his quiet house, afraid of his shadow and his memories. At one time he had a husband and a life, but that was snatched away in a violent attack. Hardly daring to live, Quinn is alive only because he’s too scared to end it all himself. He’s drowning and wants no chance at being saved.

A favor for a friend brings these two men together just in time for Tek to watch Quinn unravel. Quinn quickly becomes the most important thing in Tek’s life, but can he trust Quinn to love him once he realizes what Tek is hiding? Just as they reach for each other, their reprieve is shattered by Tek’s demons, leaving Quinn with the realization that he’s not the only one in need of saving.

Run This Town: The Complete Series

The bestselling Run This Town series is now available in one convenient volume!

Run This Town showcases the best of Avril Ashton’s dark, dirty, and diverse writing style, serving up anti-heroes from the author’s mafia/gang-style m/m romances that you can’t help but fall in love with and root for.

“If you like unconventional stories that are romantic but not sweet, tattoos, and extremely hot sex this is definitely for you.” – Goodreads Reviewer

Book #1 (Watch Me) Break You: Dima is addicted to pain. Xavier is all too willing to give it. Only one of them knows they’re supposed to be deadly enemies.

Book #2 (Watch Me) Body You: Denial. Longing. Israel and Reggie discover their feelings for each other won’t stay buried.

Book #3 (Watch Me) Unmask You: Theirs is a perfect marriage. Until a home invasion exposes secrets, lies, and shatters everything Elias and Lucky hold dear.

Book #4 (Watch Me) Save You: Two broken men in need of saving. Tek and Ashe will have to find the strength necessary to pull each other back from the edge of darkness.

Rush: an X and Dima novella

A Grenadian transplant, Avril now lives in Tucker, GA, with a madly tolerant husband. Together they raise an eccentric daughter who’s pretty meh about reading and school. Avril’s earliest memories of reading revolve around discussing the plot points of Nancy Drew and the Hardy Boys with an equally book-minded mother.

Always in love with the written word, Avril finally decided to do the writing in August of ’09 and never looked back. She’s been nominated for numerous awards, including Best Author, Best series (Brooklyn Sinners), and Favorite All-Time Author. In 2013 Avril won Evernight Publishing’s Reader’s Choice Award for the LGBT (Male/Male) category. Recently she took home the Golden Ankh award for best Male/Male romance for her bestselling novel, Sinner’s Fall.